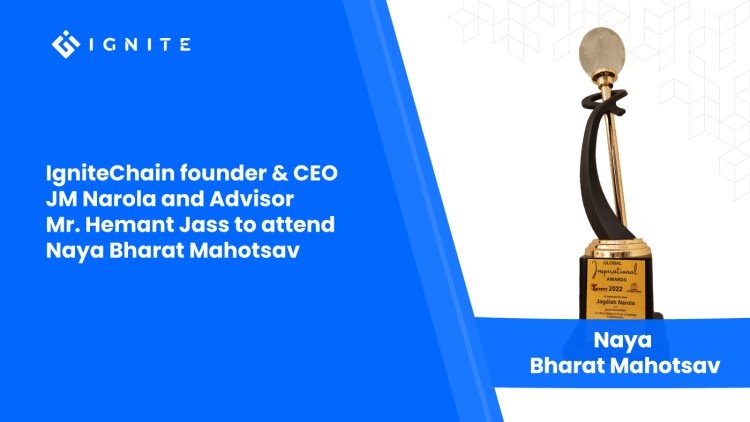 The event, Naya Bharat Mahotsav, is scheduled from the 8th of September to the 12th of September at the Millenium Gloucester Hotel in Kensington London.

We're delighted to announce that our CEO @jmnarola & Advisor @hemantjass7 has been awarded at Naya Bharat Mahotsav 2022 from UK parliament and Indian High commission. pic.twitter.com/g2YxfDbvqV

Mr. Narola has been chosen in the best entrepreneur category award for its innovative contribution to blockchain technology. By proposing the Reward Protocol in the core structure of IgniteChain, JM Narola has caught the attention of the blockchain community and tech entrepreneurs.

According to Jagdish Narola CEO of IgntieChain

"IgniteChain is solely designed for mass market adoption in the area of decentralized finance and enterprise or institutions, by providing lowest cost and yet ultra fast peer-to-peer transactions in the market, where other blockchain networks are still struggling to bring down heavy transaction fees and confirmation time,”

“The solution we have built has solid potential and use cases that clearly are boosting the adoption, despite the project - IgniteChain - being in such an early phase."

The technology behind IgniteChain is also impressive which Bollywood superstar Sanjay Dutt can not neglect and has partnered for the well-wishing endorsement and the fascinating growth of the project.

“There will be notable growth in the blockchain space. This new age technology has added thousands of new jobs and applications to the decentralized finance economy. IgniteChain is aiming to accelerate this industry by providing easy to use infrastructure and scalable solutions” says Mr. Jagdish Narola.

The program includes a panel discussion at the High Commission of India, the 'Global Inspirational Awards' in the House of Commons, and a fashion show and exhibition in the Millennium Glouccster Hotel, London Kensington to promote Indian culture.

How to participate in Ignite Coin Private Sale?

Introduction to Ignite Chain — The Next Generation Blockchain...