Top 10 Most Expensive NFTs Ever Sold

The crypto community and mainstream audience was the rise of non-fungible tokens (NFT). 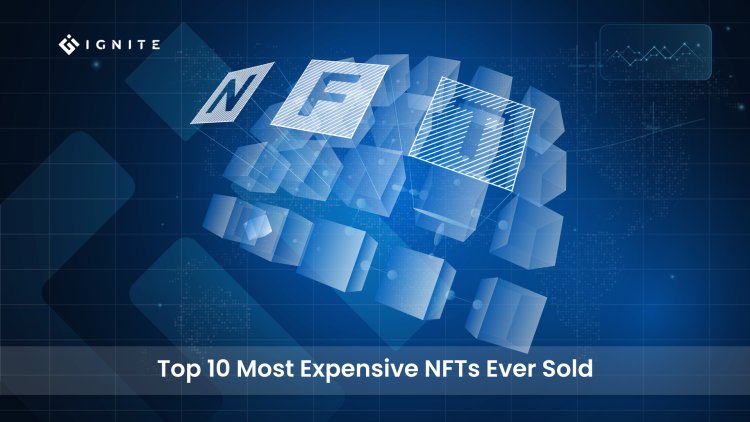 They saw exponential growth in 2021, as the digital space was being reshaped by the blockchain, where anything could be tokenized and transferred into an NFT. Billions of dollars s exchanged in the industry, Take a look at some of the Top 10 Most Expensive NFTs

Behind the seen Save Thousands of Lives is an NFT, it's created by Noora Health, is an organization that saves the lives of at-risk patients in South Asia. The art was sold for 1337 ETH, worth $4.5 million in May 2021. The profit shard to the organization's targeted to saving newborns' lives instead.

NFT is the source code used for one of the worldwide web versions it was sold to an anonymous user worth $5.4 million on June 30, 2021, via Sotheby's.

This NFT comes with different perks for the owner, such as a letter written by Sir Timothy John Berners-Lee, an English computer scientist and the inventor of the internet, a digital poster of the code written by hin, and time-stamped documents recording the history of the internet in its early days.

The name of this NFT is Crossroad, it's an animated NFT created by Mike Winkelmann, known as his artistic pseudonym Beeple. it's showing the former US. President Donald Trump sleeping on a field while bystanders ignore him.

It was sold for $6.6 million in February 2021 on Nifty Gateway, but the sale execution was made on the secondary market.

Right-click and Save as Guy is an NFT picture auctioned on the Super rare decentralized marketplace, it's sold for 1,600 ETH worth 7.09 million on December 10 to Comozo de Medici.

The buyer's alias belongs to other than hip hop legend and world-class celebrity Snoop Dogg.

CryptoPunk #3100 is part of the 9 Alien Punks series, and it's CryptoPunk#7804 is one of the most expensive Alien Punks sold to date. #3100 is an Alien wearing a blue and white headband.

The CryptoPunk is an NFT collection that consists of unique generated characters based on the Ethereum blockchain.

The Human NFT is Dynamic, This NFT was created by Beeple. It represents astronauts wandering across shifting environments and can change depending on the artist - This art didn't remain static because Beeple has promised to "update" the Human One during his lifetime.

The concept attracted many investors at Christie's, but it was crypto billionaire Ryan Zurrer who bought $29,985,000 on December 9, 2021.

This NFT was created by Michael Winkelmann, a digital NFT artist known as Beeple. The NFT was auctioned at Christie's with an initial bid of approx $100.

Their biggest bid came from crypto enthusiasts. Beeple was known in the crypto art community with six-digit sales like Crossroads. so it only looks an for the piece to skyrocket to more than $1 million, with the final output $69 million for the piece completed on the 21 Feb 2021.

The First 5000 Days is an important artwork in the NFT community as it paved the way for mainstream audiences to explore on-fungible assets.

The Merge NFT artwork created by an anonymous it was sold on Dec 6, 2021. worth $91.8 million. the piece was fractionalized to 312,686 pieces and distributed to 28,983 buyers. The Merge was a single artwork composed of a collection of "Masses" that people could buy.

These pieces could be stockpiled to make a bigger mass and sell it on the secondary market. By the end of the sale, a total of $91.8 million was spent, This NFT is the most expensive in the industry.