A blockchain is a distributed database that is shared among the nodes of a computer network. it stores information in digital format. The innovation of blockchain is that it guarantees the loyalty and security of a record of data and generates trust. 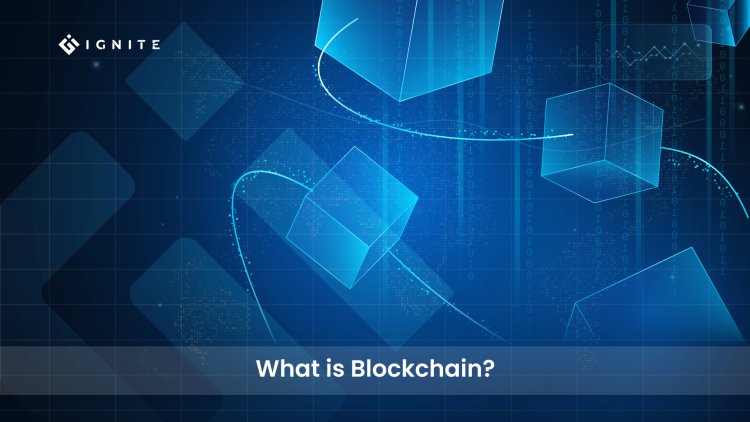 A blockchain collects information together in groups, known as blocks, that hold sets of information. Blocks have certain storage capacities and, when filled, are closed and linked to the previous block, this process is called a blockchain. all new information that added block is compiled into a newly formed block that can be added to the chain once filled.

A database structures data into a table, its data into blocks that are connected. this data structure makes an irreversible timeline of data when implemented in a decentralized. When a block is filled, it is set in stone and becomes a part of this timeline. When it is added to the chain each block in the chain is given an exact timestamp.

How does Blockchain work?

The Blockchain aim is to allow digital information to be recorded and distributed, but cannot edit, delete and update the data, that's why blockchain is known as Distributed Ledger Technology (DLT).

While blockchain is mostly used to store cryptocurrency transaction history, also used in legal contracts or product inventories can be stored.

Has intrinsic value as it is a trustworthy, secure, and fast way to transfer value for little to no cost Has no physical form as if exists only on the immutable blockchain.

The attributes of a cryptocurrency such as total supply, are decided upon by the majority of the members of its decentralized network instead of a central bank.

With blockchain, you can rest assured that you are receiving accurate and timely data and that confidential blockchain records will be shared only with network members to whom you have specifically granted access.

Consensus on data accuracy is required from all network members, and all valid transactions are immutable because they are recorded permanently, no one or system administrator can update or delete a transaction.

With a distributed ledger that is shared among members of a network, time-wasting record reconciliations are eliminated, and to speed transactions, a set of rules called a smart contract can be stored on the blockchain and executed automatically.

A public blockchain is known as the open or permissionless blockchain, which means anybody can join the network freely and establish a node. these blockchains must be secured with cryptography and a consensus system like proof of work (PoW) The Drawbacks of a public blockchain are required power, no privacy for transactions, and weak security.

A private blockchain required each note to be approved before joining because nodes are considered to be trusted the layer of security it's a decentralized peer-to-peer network. A private blockchain can be run behind a corporate firewall and even be hosted on-premises. |

Advantages and Disadvantages of Blockchain:

What is the Decentralized Autonomous Organization (DAO)?