Consensus protocols are an important part of many distributed systems, including blockchain networks and distributed databases. They help to ensure the integrity and reliability of these systems by enabling nodes to reach an agreement on the same data or state.

From a technical point of view, the Ignite Chain is built upon existing proven blockchain innovations and novel technologies that are created for achieving mass adoption. These technologies include a Proof-of-Stake (PoS) consensus mechanism, meta-transaction features, protocols of transaction fee delegation, on-chain governance, built-in smart contracts as well as tools for developers.

The validator repeats this sampling process until the alpha of the validators queried replies the same way (accept or reject) for beta β consecutive rounds. 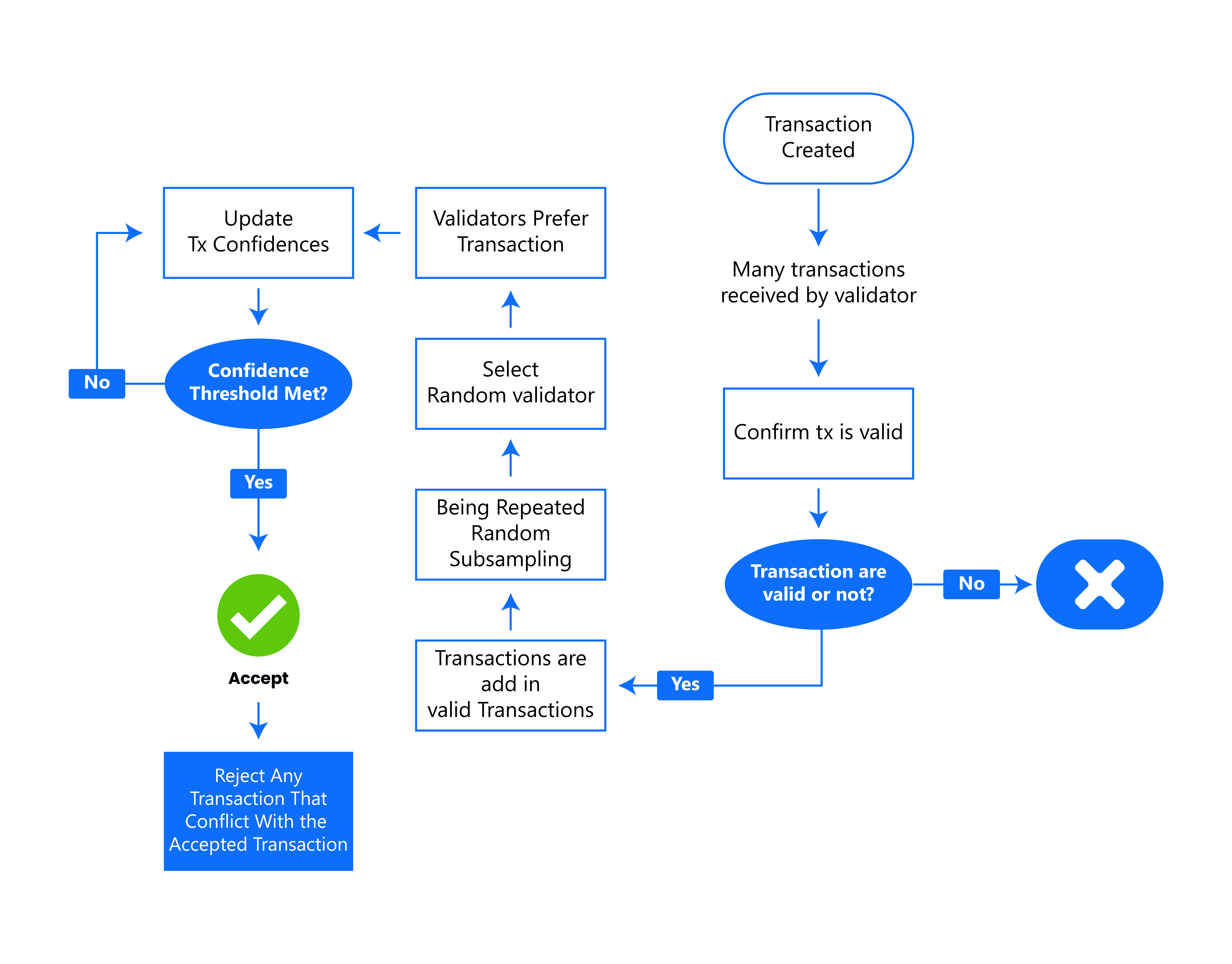 IgniteChain network is using reward-based validation (Proof-of-Reward) with the security of Proof-of-Stake (PoS) consensus in process of validating & broadcasting transactions on the network.

What is YAN: Yantra (YAN) is the core of the consensus algorithm for IgniteChain. It executes every method and logical statement in a cryptographical manner to run the consensus.

We have put more than 20 years of combined research together to come up with a solution that involves the whole community and does not just incentivize node operators. With the use of the Reward Protocol, this consensus creates a stamp of every transaction by comprising transaction (TNX), sender (U), validator (V), contract developer (D), foundation (F), and system (S).

Validator reward is split into two portions: 1. 50% goes to the node operator and the other 50% is shared among the delegator to that particular master node. The Masternode with the highest delegator is prioritized and gets a high chance to validate the transaction. From the total amount of Masternode, a maximum of 251 gets to run the network and validated procedure. All node operators are required to stake 50,000 IGT tokens to be able to become Masternode and participate in the transactions validating process.

Ignite Reward Protocol is the structure of PoR consensus. It is called before broadcasting transactions on the IgniteChain network. Reward protocol calculates every transaction-associated gas fee and distributes it to comprising recipients’ addresses to create a stamp of transaction execution.

As Proof-of-stake is a very popular consensus mechanism, it provides a highly secure operational structure to the blockchain network. We are using the sub-consensus of PoS, called Proof-of-Stake Voting combined with our own Proof-of-Reward (PoR) consensus. The reason behind choosing PoSV is that it ensures the true structure of decentralization. Every IGT token holder gets a chance to participate in process of securing the IgniteChain network by staking & voting validators. Voting in PoSV is a continuous process and each Masternode on top is always at risk of being replaced by another master node that gets more votes. Masternode with higher votes is considered more as its chances of validating transactions and Masternode capacity increases rapidly. As the number of masternodes & delegators grows, increasing Masternode capacity becomes significantly important for every masternodes.

The Key Feature of IgniteChain for Maximizing Blockchain Efficiency

Haxly Group to Invest $25M as Strategic Funding in IgniteChain...

Looking Back at 2022 – IgniteChain Year in Review

How IgniteChain Can Help: The Crypto Regulation in India